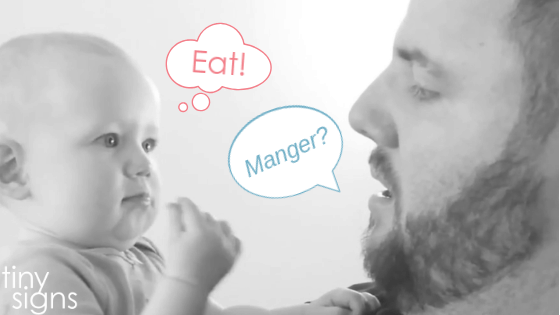 I often get asked by families who are using two spoken languages with their baby, “will signing just make things more confusing!?” My answer to this is always a resounding, “absolutely not!”  The fact is that signing can actually help your baby make the connection between the two spoken languages, accelerating the learning process and facilitating better communication all around. 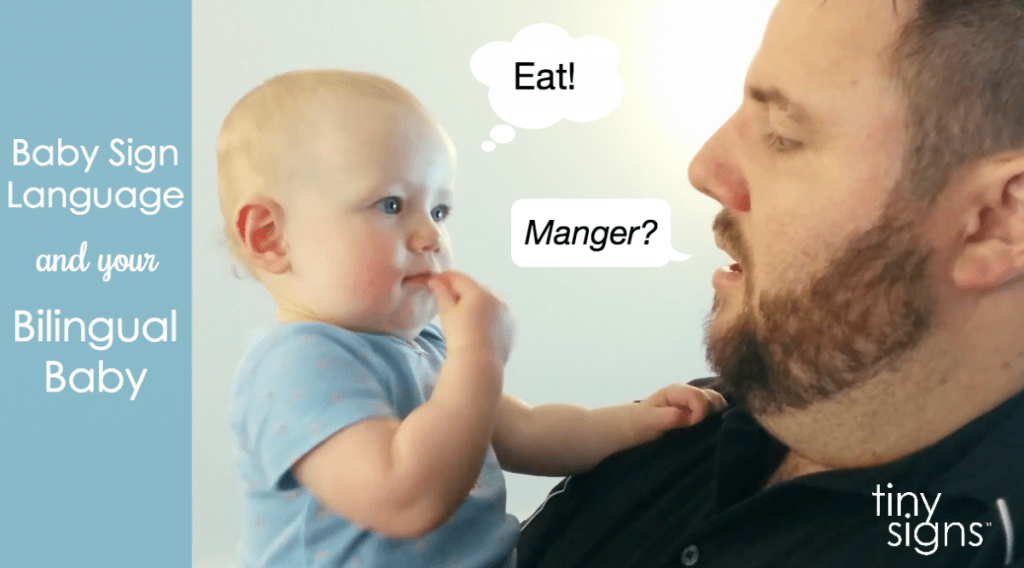 Signing: The Bridge Between Spoken Languages

As your baby’s receptive language develops, they begin to associate a spoken word with an object. For example, your baby will learn that the spoken word “cat” means that furry thing that walks around the house and won’t let me touch it. ;)

A bilingual baby will need to learn the cat=that furry thing and also that gato=that furry thing, and then also make the connection that cat and gato have the same meaning.

Other Benefits of Signing with Your Bilingual Baby

One of my favorite benefits of signing with bilingual babies is it provides an opportunity to know what your baby understands in both languages. For example, a family that took classes with me shared their amazement when their baby signed “peach” when her grandparents mentioned the word conversationally in Mandarin. Before that moment, they had no idea just how much of her grandparents’ language she was really picking up!

There are many ways to expose your baby to two spoken languages, but one of the most popular is the OPOL (one parent – one language) method. This is when each parent speaks exclusively to the child in their primary language. For example, mom always speaks Spanish and dad always speaks English.

See How It Works

I was so excited when one of the members of our Tiny Signs Online community shared a video of her bilingual baby signing while listening to her parents speaking to her in both French and English.

In this video, you’ll see how signing facilitates beautiful communication in a bilingual family…

Here are some very cool facts:

This one simple sign allows her parents to really know what she is learning in both languages and how her vocabulary and comprehension is developing – all before she has spoken her first word!

If you are planning to use two spoken languages with your baby and have any concerns that signing might confuse things, I hope this puts that worry to rest, once and for all!

Baby sign language is a wonderful tool to enhance communication in your bilingual home!

A huge thank you to Melissa and Roch for allowing me to share their video. Merci beaucoup!

Would you like to join the growing community of new parents in the Tiny Signs Online course? We’d love to have you! Just click here for more information and we’ll see you inside the program! 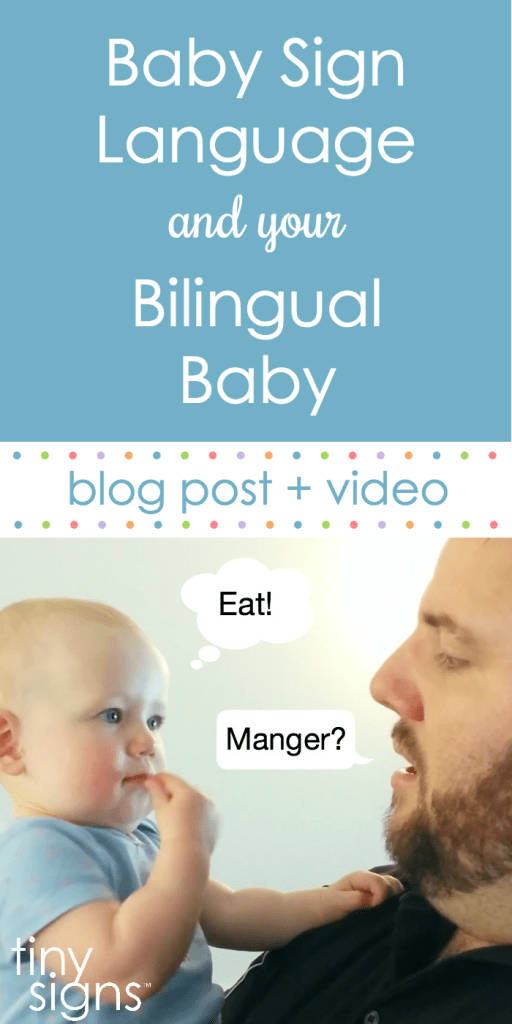 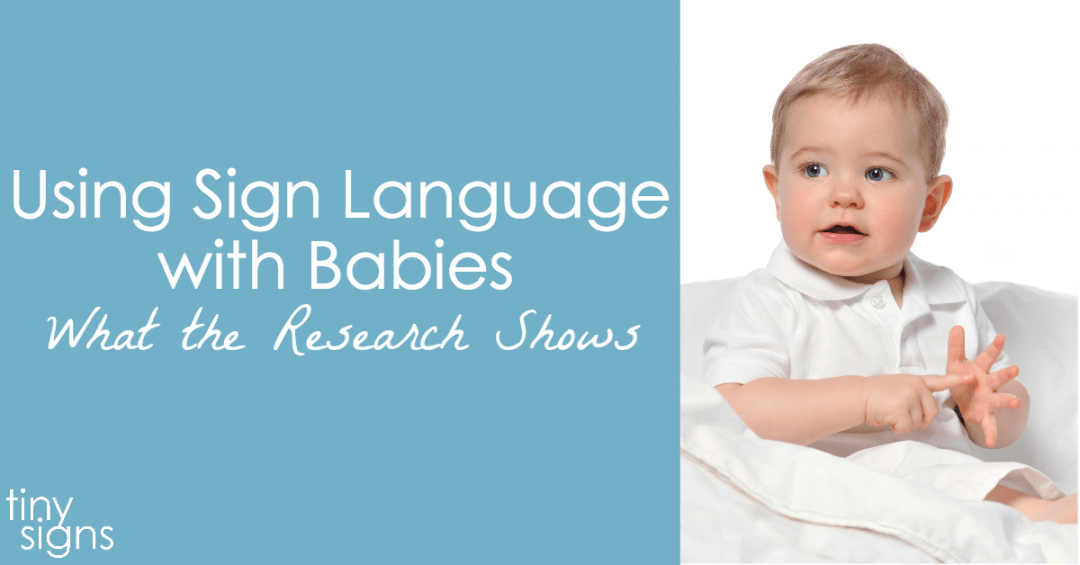 Will using sign language with babies delay speech? What the research shows…

I’ve shared more informal posts about the why signing with babies is so effective and what I love the most about signing with babies, however, I’ve had multiple requests for a more formal summary of what the research on baby sign language shows. In response to that request, I’m pleased to share the following summary…

Babies begin communicating from the moment they are born – using cries, coos & grunts to make their needs and desires known. As their bodies and minds develop, their communication evolves to include eye gaze and even pointing at objects that interest them.

Baby sign language is the practice of using this natural ability to communicate using gestures to facilitate quality communication before a baby’s ability to speak has developed.

A question that often comes up when discussing using sign language to communicate with an infant is “how will signing affect my baby’s speech development?”

Let’s take a look at the evidence: in research studies on using sign language with babies, none have shown that using signing causes a delay in language development. In fact, the overwhelming majority of research shows that signing has many positive short-term and long-term effects.

While there have been many studies done on this topic, the most influential research was conducted in the 1980s by researchers at University of California, by Drs. Linda Acredolo and Susan Goodwyn. This study was funded by the National Institute of Health and it was inspired by Dr. Acredolo’s personal experience with her own baby…

Dr. Acredolo noticed her infant daughter “blowing” at the fish in the aquarium at the pediatrician’s office. Later in the day, when putting her daughter down for a nap, Dr. Acredolo ‘activated’ the fish mobile above her daughter’s crib by blowing on it to make it spin. Realizing her baby was communicating the concept ‘fish’ by making blowing gestures, Dr. Acredolo (along with Dr. Goodwyn) went on to conduct one of the largest research projects on infants and pre-verbal communication.

By aged 2, the group of signing babies:

Drs. Acredolo and Goodwyn followed up with the infants in their original study when the children were age 8 and found that the children who were signed to as infants had, on average, IQs that were 12 points higher than their non-signing peers.

Other notable research by Dr. Marilyn Daniels studied the impact of using sign language in the early childhood classroom (preschool and kindergarten). Her research focused on how signing affects literacy in hearing children. Her research found that young students in classrooms that incorporated signing into the lesson had many positive effects on young learners and that students in signing classrooms scored significantly higher on vocabulary test than the students in the typical classrooms.

Students in the signing classrooms

Dr. Daniels concluded that signing had a positive impact on test scores and literacy skills because it accommodates multiple learning styles including auditory, visual & kinesthetic learning.

Most child development experts will cite that frustration is the main cause of toddler tantrums and meltdown. Often this frustration stems from an inability to communicate and be understood. Using signing to facilitate communication during this challenging time can have an incredible impact on both infants and caregivers.

Some research has been done to study how signing impacts the parent-child relationship. Findings suggest that babies who sign receive better language feedback from their caregivers. For example, a baby who points at a new object might initiate a discussion about the object of interest with their mother.

Studies also suggest that parents who use signs with their babies experience less stress and frustration, and are more affectionate with their babies. Research also has shown that signing babies are more engaged and connected with their parents and initiate interaction more often.

From an evidence-based perspective, the body of research supporting sign language use with infants and toddlers is compelling. The number of studies itself demonstrate the interest and awareness of this enriching way of communicating with babies. In the course of research, popular doubts and concerns such as delayed speech from signing have been effectively debunked. Most importantly, the research helps to validate the curiosity and desire parents have to start communicating with their little ones much sooner than “mama” or “dada” is first uttered.

Research Summary of Benefits of Signing with Babies: 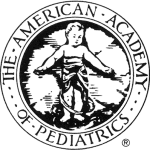 “Infant sign language really does deliver on its promise of improved communication.”

– The American Academy of Pediatrics 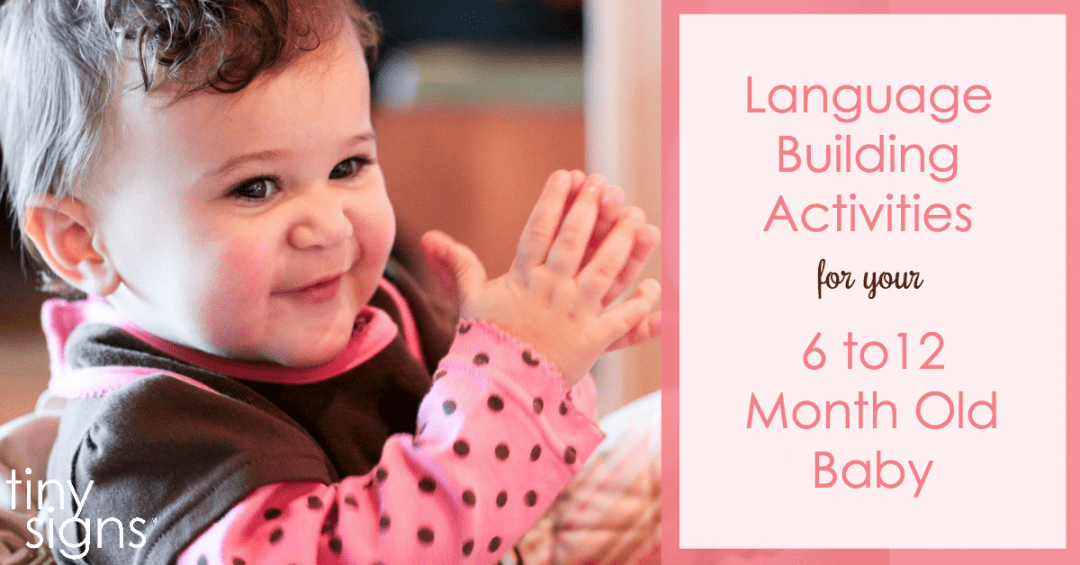 Language Building Activities for Your 6 to 12 Month Old Baby

Babies from 6-12 months are rapidly learning new skills across all areas of development. This is a wonderful time to interact with baby in meaningful ways that encourage their blossoming communication skills.

Baby’s emerging babbling during this stage provides great opportunities to practice the back-and-forth dynamics of a conversation. Engaging in reciprocal conversation is important from the start. Narrating to baby about the world around them is great, but encouraging them to communicate WITH you (whether its grunts, babbling, word approximations, sign, etc.) builds an important foundation for conversational skills.

Conversation topics are everywhere and can range from what you & baby are experiencing, to how baby is feeling, to the way their senses perceive the environment around them.

Here are a few quick and fun language building activities to try with your baby:

Language Building Benefits of these activities: 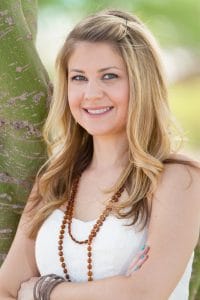 Alison Edelstein is a mama of two sweet girls, a Speech Language Pathologist and creator of Chirpy Chatterbox, which provides tips on fostering speech and language development and parenting through music, laughter, and play. 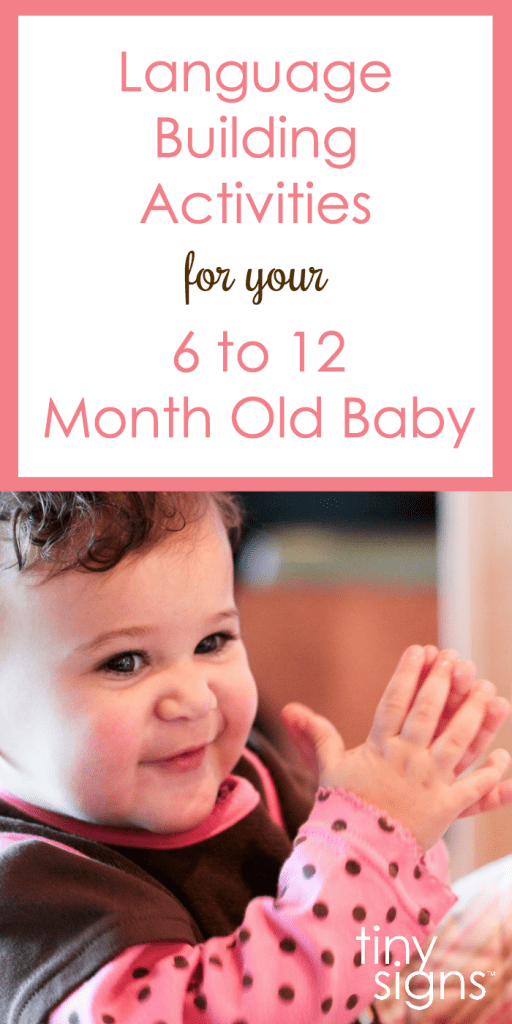 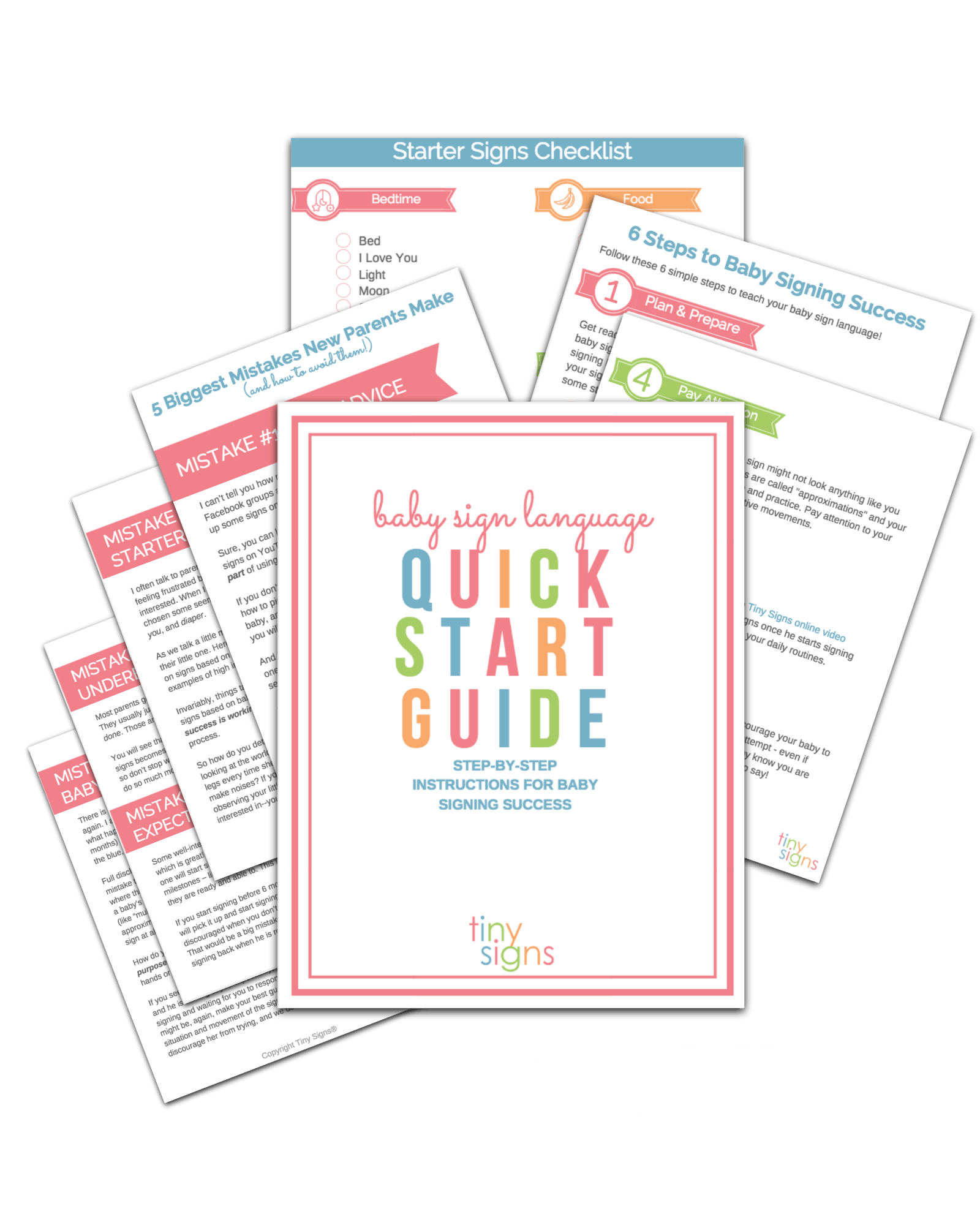 Subscribe to the Tiny Signs newsletter and get free tips & advice via email. You'll get the FREE Baby Sign Language Quick Start Guide delivered straight to your inbox as a special thank you for signing up! 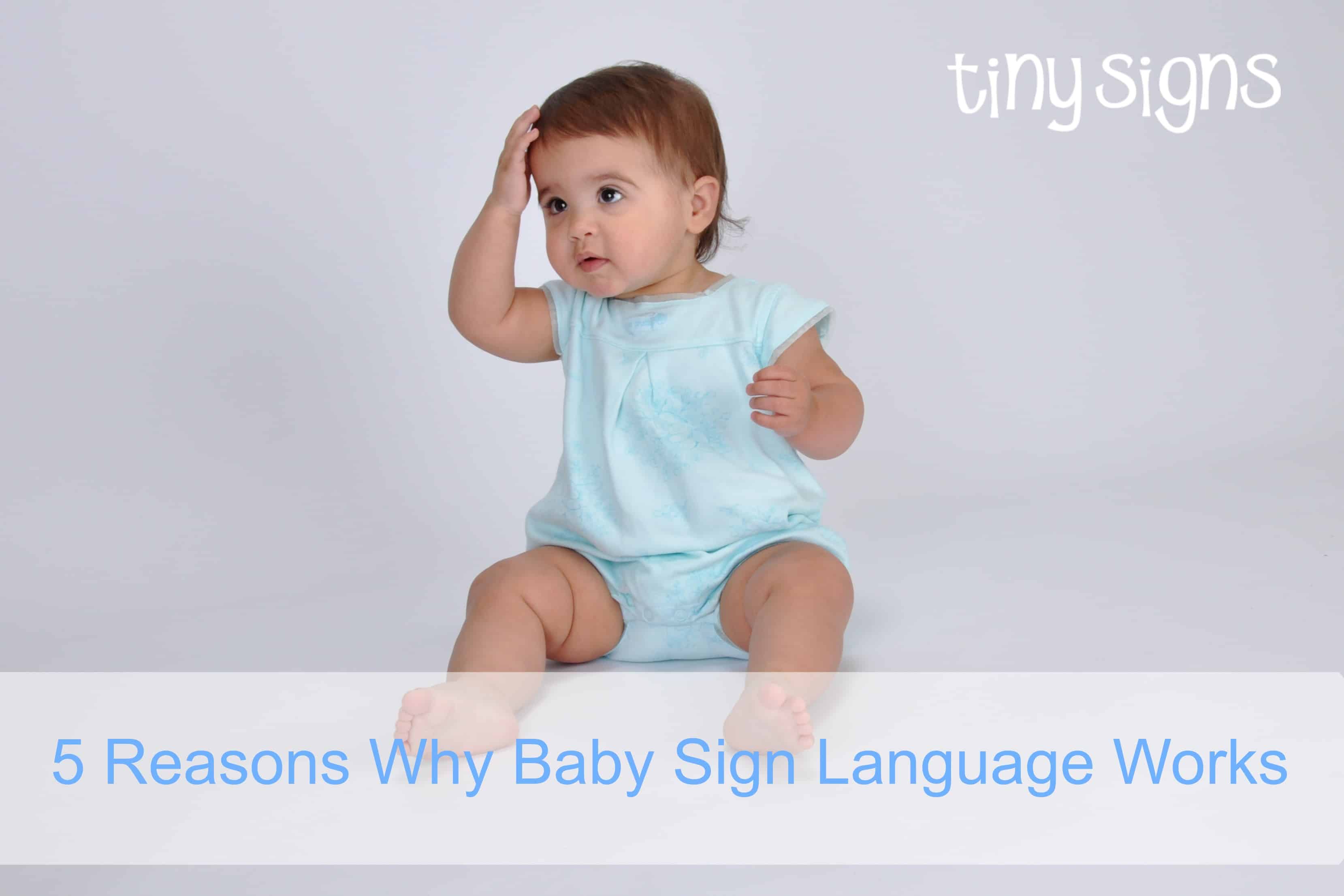 In last week’s blog post I shared just some of the amazing benefits of using sign language with your baby.

This week I’d like to take a quick look at WHY the simple act of pairing some American Sign Language vocabulary with your spoken words can create such amazing results. Here are 5 reasons why baby sign language works….

ALL babies gesture. As your baby gains more control over his arms and begins interacting with you more, he will start to clap, wave & point.  Exposing your baby to sign language provides a tool that builds beautifully on his existing natural abilities.

Your baby is exposed to hundreds of words each day and her amazing brain is busy trying to differentiate all of these sounds AND figure out what they mean. Adding signs to what you are saying highlights key vocabulary AND gives your baby a visual clue to what the word means as many ASL signs look like the word they represent.

Some of the amazing benefits of baby sign language [hello, higher IQ!] are almost hard to believe. One interesting area of research suggests that by exposing your baby to both auditory language (speech) and visual language (signing) you stimulate multiple areas of your baby’s brain, building more neural connections and ultimately improving intelligence. Wowzers.

4. Signing works with all learning types.

All people, including your baby, have different learning styles – which is to say, we all have a way we learn best. Think of reading a book – do you get more out of listening to a book on tape than reading it yourself? Then maybe you are more of an auditory learner than a visual learner. You probably won’t discover your baby’s preferred learning style for a few years, but baby sign language has you covered as it is engaging for visual, auditory and kinesthetic learners.

5. Signing is active vs. passive learning.

Babies learn by exploring their world through their senses – whether it’s experiencing a breeze on their skin or bringing a toy to their mouth to explore it’s texture.  But when it comes to communication, babies usually get stuck in the passenger seat.  Signing, however, allows babies to actively take part in communication months before they can talk – moving them from passive observers to the conversation around them to active participants.

Ok, wow. Just writing this post got me all fired up [for the millionth time] about baby sign language. I am READY to start the next session of Tiny Signs Online soon. Are you!?